A Successful Meeting with Members and Neighbours in NW3

Yesterday evening, members of the NW3 Community Land Trust and local residents met for a series of roundtable discussions to talk about the future of affordable housing provision in the Hampstead and Belsize area. The conversations were fruitful, and the residents expressed enthusiasm for our work and recognised the need for commuity-led housing the local area. Many people also shared stories about how the area was becoming unaffordable for ordinary people and how they wanted to keep the community as a mixed and vibrant one. In particular, it was felt that the sale of key worker housing, sheltered accommodation, and student accommodation to private developers has exacerbated the situation.

We also presented some plans that we had put together for a small site in NW3. We then heard feedback from residents, and also asked them what they would like to see happen to a site such as the one we discussed. Among the topics of interest were the size of the units, their tenure(s), and the CLT's allocation policy.

Our thanks go to everybody who attended and contributed, as well as to Community Led Housing London for their support and to Age UK for allowing us to hold the meeting in Henderson Court in Hampstead. 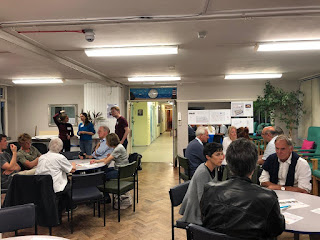